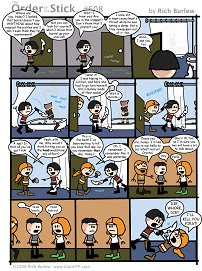 (From The Order of the Stick. Click for full-sized lingering resentment.)

The malady is restricted to readers and fans of the popular webcomic Order of the Stick, and is caused by falling under the perception that the strip is actually a chronicle of a D&D campaign, rather than merely being set in a universe that runs on D&D rules. Symptoms are generally only manifest on the OOTS forums, and include referring to “_____’s player” and “the DM” (which may or may not actually be a representation of Rich Burlew), and interpreting characters’ actions through the lens of the “player” supposedly carrying those actions out.

It’s reasonable to fall under this perception anytime (I myself once proposed that the strip would end with just such a revelation), as the distinction can be hard to grasp for new readers (especially those already immersed in D&D), and to some extent Rich has played with the notion of a GM being present from time to time, but for whatever reason it has become particularly common recently, with virtually every strip’s thread (and a few others as well) eventually including some post that looks at what’s happening from a “game” point of view, despite Rich being on record in stating that there are no “players” at all, and despite evidence ranging from NPCs as fleshed out as any PCs (especially the main villains) to the very existence of the prequel books. Rich even made reference to the phenomenon in a recent strip.

One result has been a mere shift in terminology: “_____’s hypothetical player, if there was a player…”

Or perhaps it has something to do with the specific content. At least one forum member recently complained that the strip had traded in being “consistently funny” for “player motivated drama”. More than a few people, including one thread I linked to above, have compared the current state of the OOTS to a gaming party in disarray, with everyone upset at the DM and the DM himself slowly losing control of everything. (Oddly, although the interpretation of OOTS-as-campaign has become popular, the exact nature varies: some see the split as partly player-driven – possibly as a means of filibustering a main plot they didn’t sign up for – some see it as the DM railroading the players and wasting everyone’s time, and some even see it as being the victim of circumstances.)

That may at first be just a variant of the megaplot being abandoned, but consider:

Last time I wrote about OOTS, I said that “this section of the OOTS’ story is going to have far-ranging consequences that could prevent some of those goals from ever being completely fulfilled.” I was referring to V’s decision to leave the Durkon/Elan branch of the OOTS in #599, which I suspected could result in the de facto permanent removal of Durkon and Elan from the OOTS. That’s one far-ranging consequence that may be being set up, but what about everything else? What was the point of introducing Kubota and fleshing him out just to abruptly kill him? What was the point of the whole Therkla thing? What’s the point of what’s happening now with the Thieves’ Guild? What’s the point of stretching out the split itself this long?

Not only is the fandom starting to get restless about their ability to believe that this will all matter in the end, it’s starting to take several leaps of faith to link this to the main plot. Kubota was just a feint to introduce Qarr; Elan and Haley’s relationship is going to be strained; the Thieves’ Guild is going to become a recurring villain group; by the time the OOTS get back together Team Evil is already at Girard’s Gate. The mere fact I’m making these leaps of faith rather than treating it as a diversion is a sign of how it’s gone longer than most people would probably have expected or liked.

The OOTS has drifted off the beaten path before, of course. Their lengthy encounter with the bandits has had zero impact on anything that’s happened since then, but it came before the Order met Miko, let alone learned about the Snarl, and can be excused by the strip still being at least partially a gag strip then. All their encounters with the Linear Guild have of course had next to nothing to do with the gates (so far, but that will almost certainly end the next time they show up, given evidence here and here), but the encounter in War and XPs, besides tying up a loose end from the pre-Snarl era, leads to Haley getting her voice back and keeps the OOTS distracted enough not to run off to the wrong gate – which in fact, given some of what we know about Girard’s Gate and the potential of the Oracle’s prophecy to be twisted, could well be what’s happening here. (More on how the Linear Guild’s encounters with the OOTS has really affected them in a later post.) So far, it’s far from clear even if this will have any long-term impact.

It’s possible that Rich had over-emphasized the plot from about #275 (or even #200) onward, and that the plot has only ever been incidential to the humor. In this theory, people who are complaining about the pace at which the plot is moving are misinterpreting the nature of the entire strip. But if so, it’s a widespread enough misconception that at least some of the blame has to be heaped at the feet of Rich Burlew, because he created the circumstances that are now ruining people’s enjoyment of what might be, beyond the surface, actually a fairly entertaining part of the strip’s history. And if it’s not a misconception, and Rich really is taking a long time on what might be a comparatively small plot point, it may well be the most major blemish on the Giant’s record. (The first snag in a new fabric of reality, perhaps?)

None of the people complaining, to my knowledge, have ditched the strip. And I’m not among those who isn’t appreciating the strip for what it is at the moment. I’m not one of the players complaining to the GM. But it’s clear that the player mutiny is growing to disturbing levels, and it’s something the GM may have to address with more than a wink and a nod soon. Ultimately, the spread of OGTS may be most directly attributable to Rich Burlew himself.

4 thoughts on “If this post is full of the HTML code for an ampersand in hyperlinks that get broken as a result, blame Blogger’s “draft” post editor.”